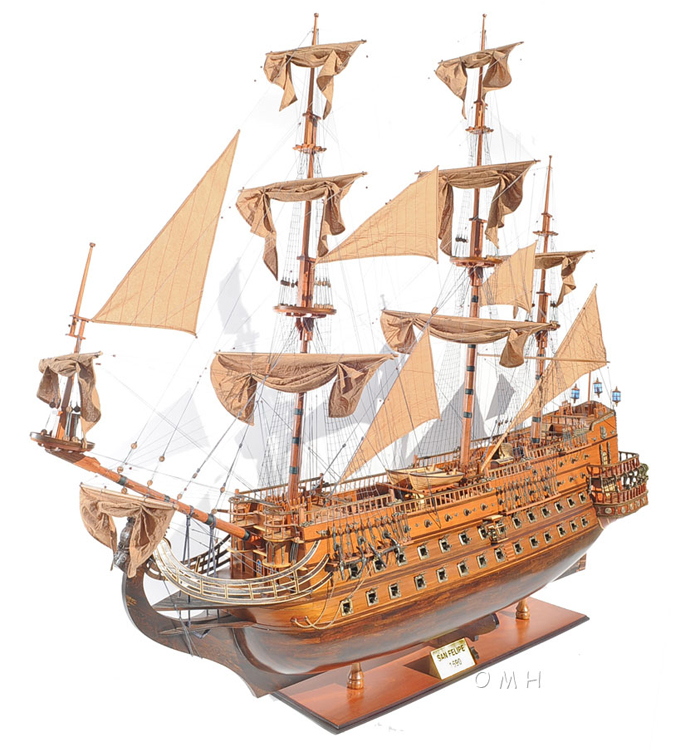 What is a ship or boat model? Models of ships and boats have been made for several centuries and can be classified roughly into three categories.

The first category is the models made by actual sailors either actively sailing or retired. When at sea to relieve the boredom of the quieter times at sea, sailors turned to ornamental rope & knot work, tattooing, scrimshaw carving and the making of models of the ships they were sailing on. Many of these ship models were crude reproductions, but some were exquisite models which is interesting considering the cramped quarters and conditions.

The second category are the models made by shipwrights and boat wrights for the express purpose of ship and boat building. For centuries shipwrights have built models to test out their ideas and to show they worked to potential investors and to the seaman that would actually sail & use the vessel. These models also made it very convenient if modifications were required.

Some of the most beautiful and detailed of these shipwrights models come from the dockyard models of the seventeenth & eighteenth centuries that were built for the Navies of that time. Details such as the lashings in the rigging, bolts in the hull and cannons on their carriages make some of these models the finest in existence.

The third category are the model tall ships and boats built for the sole purpose of being decorative, whether for prestige or for use as advertisements. These models are built as exact replicas of ships and boats already afloat. Destined for the boardrooms and display windows of shipyards, shipping companies and perhaps even your living room or office. The models are built by skilled craftsmen some of which depending on the degree of detail require 100's of hours to construct.

A model ship or boat may belong to one of these three categories, to further classify the model one would look as to how it is built or shaped.

Model ships made of wood can be said to be block (made from a single piece of wood) or built models (such as plank on bulkhead as most our models are in captjimscargo.com). Sailors at sea were known for block models carving or whittling the hull out of a single piece of wood. Built models are pretty much constructed as the actual ship or boat was made. Most wooden model tall ships and boats are built by the plank on frame or more appropriate term plank on bulkhead construction. Plank on frame construction is the same way actual full size ships and boats are built and for modeling this can be very difficult and expensive so most all ship models are built by the plank on bulkhead construction method (joining multiple small pieces of wood onto frame or bulkhead members).

Waterline models are models that only show the parts of a ship or boat that are above the waterline. They are usually of smaller scale and are mounted on flat bases painted and shaped to resemble water. One of the largest collections of waterline models is at the Mariner's Museum at Newport News. Built for the US Navy during WWII for identification purposes are nearly 225 ship models both combative and merchant of the USA, UK, German, Japanese and French Navies.

Half models only show one side of the hull of a ship. Half models were widely used by shipwrights to perfect the shape of the hull, shaving or rasping off a little bit at a time. Then the half model would be used to take the lines off of to build the full size hull.

There are some fantastic collections of model ships and boats throughout the world that can be viewed, most for free at museums and gallery's of any country that has a maritime history (possibly another soon to come blog post).

If your interested in starting or adding to your own model ship or boat collection, I welcome you aboard captjimscargo.com to browse our extensive offering of Tall Ships, America's Cup, Sailboats, Speed Boats & Runabouts, Motor Yachts, Canoes & Kayaks, Cruise Ships & Ocean Liners, Pirate Ships, Battleships, Ferry Boats and Half Hull Models.