Not too many tall ships were as commanding in their day as the HMS Victory, the British man-of-war was launched in 1737. She was built over the course of 11 years by the Master Shipwright Joseph Allen at the Portsmouth Dockyards. For her day the war ship was a technological marvel with 100 bronze cannons and four stern galleries and three quarter galleries. The tall ship was the last Royal Navy vessel to go down with bronze cannons. She was the direct predecessor and inspiration for Admiral Nelson's flagship the Victory. 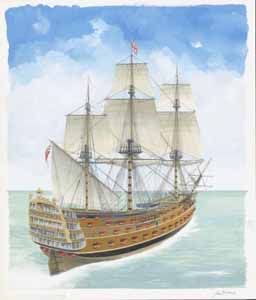 The HMS Victory a fully rigged triple-decker ship was 174 feet long and 50 feet wide (beam). She weighed 1921 tons and drew 18 feet (draft). The hold was 20.5 feet deep. The 1737 Victory was actually a rebuild of a previous Victory that had caught fire in 1721 and contained many timbers from that war ship. The cost of this new Victory was over 50,000 pounds ($).

In July 1744 Admiral Sir John Balchin, a 60 year navy veteran took command. Having commanded 13 different warships in the Old and New Worlds, Sir John was a celebrity at the time. He was recalled from retirement to command the HMS Victory and sail down to Lisbon to rescue a blockaded convoy on the River Tagus. The French General de Rochambeau's Brest fleet was preventing the British convoy from transporting much needed supplies to the fleet in the Mediterranean. Admiral Sir John liberated the blockaded convoy and escorted them to Gibraltar.

On the return voyage the Victory took on a large cargo of gold. During a violent storm the Victory went down with all hands lost, over 900 souls including Sir John. Because of the high sides of the Victory she was to believed to be easily pushed downwind, which contributed to her end. Going down with the ship were about 400,000 pounds ($) of gold. The ships exact final resting place has been a mystery for centuries. In 2008 the Odyssey Marine Exploration of Tampa, Florida located her.

The rumor had been that the Victory went down off the Casquets, a reef near the Channel Islands, known as the graveyard of the English Channel. Actually Odyssey Marine found the wreck 100 km away, in the Western approaches between France and England. The Victory's remains lay at a depth of 330 feet. Odyssey raised two cannons and positively identified the ship. The cannon recovered include a 12-pounder with the royal arms of George II and a 4-ton, 42-pounder with the crest of George I. The giant 42-pounder recovered is the only known example of a gun of this type and size currently in existence on dry land.

In 2012 plans were announced for the archaeological excavation of the site, including a plan for recording, documentation, conservation, publication and public education. The Maritime Heritage Foundation is currently waiting for permission from the Ministry of Defense and a license from the Marine Management Organization so as to proceed with the recovery of at-risk, surface artifacts. So far no lost gold has been found.